Solve it as it indicates us to.

We can try all of the notches. If the original bar is split into $A$ and $B$, we have to pay at least $\lvert A - B \rvert$ and it is enough since we just adjust the shorter one to reach the longer one. Here, $A$ and $B$ are calculated by accumulated sum in $O(1)$ for each $N$ cases. The time complexity is $O(N)$.

Suppose that all lines has at least one strawberry. Then, first we cut the all lines. Now the problem is $1$-dimensional. It can be solved by some greedy algorithm since each cake’s size is not necessarily the same. It is sure that the cut cakes consist of rectangles.

In case that some lines has no strawberry, first we ignore them and solve the problem for each line containing strawberries as above. Then, we can expand those lines to the empty lines by just copying them. It is suffice to work iteratively on two adjacent lines which the one side is done and the other is empty. Just copying the former to latter is suffice. They keep generating rectangles.

My dirty solution during the contest

This can be done recursive ways to arrive at the terminal state. Since we have kept the upper bound, it gives the answer. 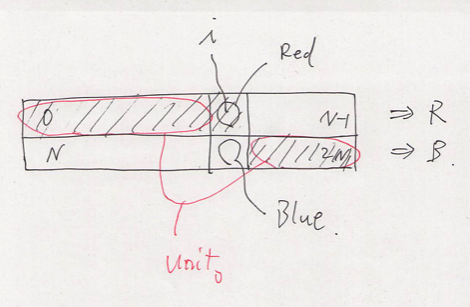 First, we solve the problem when $T = 1$. There are three patterns.

Suppose we have the pair of adjacent robots H and D. Then, what can come under the H? If it is R, it will hit with D in a second. If it is D, it will hit with H after some seconds since here the grid is a $2$-dimensional torus. Therefore we must have H under the H. Then, what can come under the D? If it is H, the rule breaks in a second. If it is R, the rule breaks in some seconds. So it must be D.

Therefore, we have the pair of adjacent two columns of H and D. We see the whole of the grid. If we have a R, it hits the column consisting of H in some seconds. Therefore, we conclude that there is no R. To be short, the whole grid is composed of the $W$ columns that consist of exactly either H or D. The number of the valid grid of this pattern is $2 ^ W$. 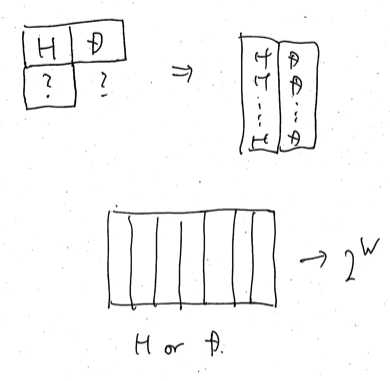 Suppose we have the pair of adjacent robots H and R. The argument and the conclusion is almost the same. There is no W and the whole grid is composed of the $H$ lines that consist of exactly either H or R. The number of the valid grid of this pattern is $2 ^ H$.

We consider the grid where there is no H. How can we put R and D? It is difficult. 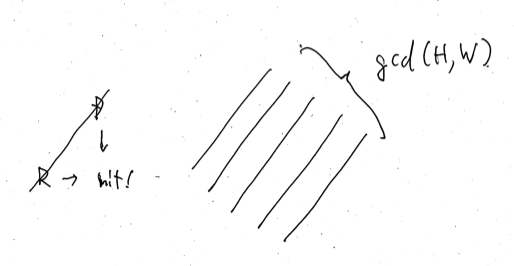